There are many exciting peaks to climb throughout the world.  When time is tight, it’s best to consider a short trip.  Meagan will use these opportunities to keep skills current, explore new opportunities, or go to places she never would have considered were it not for the suggestion of friends.  A short or long trip – everything has the potential to be an adventure!

The summit push should not have taken too long, but deep snow meant that she had to post-hole every step. And on the summit slope, she had to build each step, ascending toward the summit a few inches at a time. A short climb turned into a fun but long day.

The weather, mercifully, held on throughout the day, and only upon her return to Camp 2 (high camp) did the scheduled winds arrive. She is grateful to her climbing companions, Pablo and Hector, who were wonderful company and helped where necessary, such as alarms in the middle of the night for breathing and an unplanned 4×4 drive up high!

The trip ended with a welcomed bath in the Termas de Fiambala – a highly recommended stop if your ever in the region!

Meagan and her climbing partner for the day, Sama, summitted Pico de Orizaba on 11 January 2020.

We were rather quick, apparently, as Sama stopped a few times to take pictures of the waiting truck in the shadow of the mountain. He’d never completed the climb before the sun hit the car! It was a great morning climb, and the beautiful light of the early day made the view of the moon and shadow of the mountain particularly memorable. 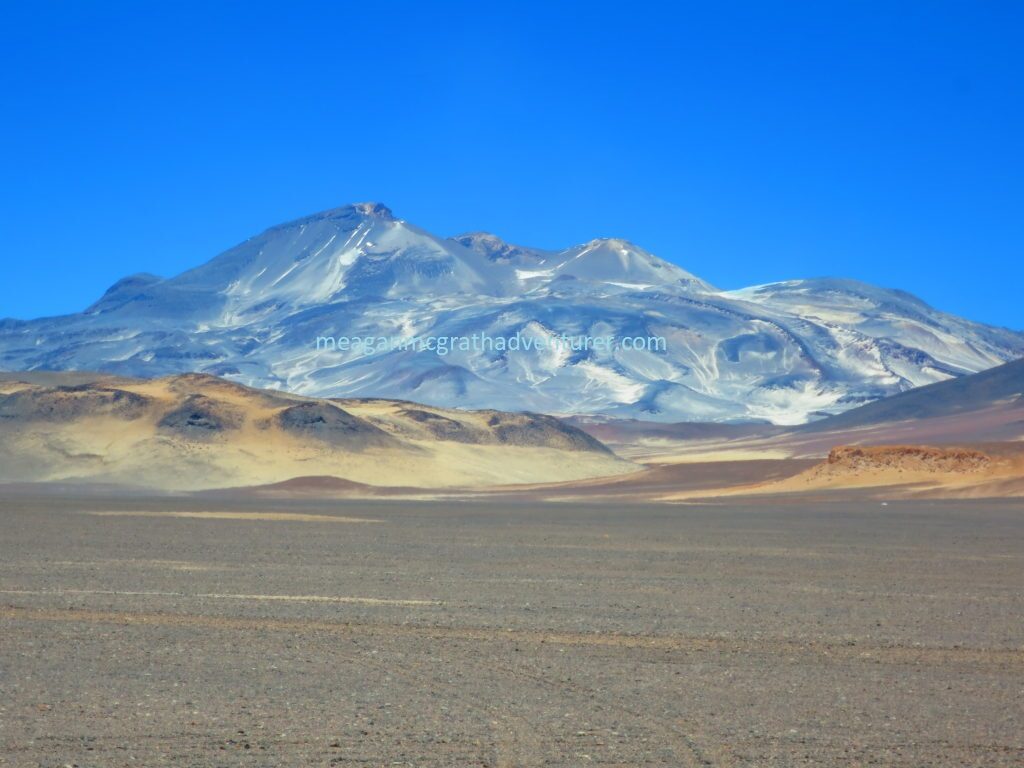 In December 2014, Meagan attempted to climb Ojos del Salado in the Atacama Desert.  She hired a guide to take her to the peak, as she had never been there before.  There was a lot of wind on the summit morning, and it was deemed best to turn around only 30 feet from the summit!!

In January 2017, Meagan returned to Ojos del Salado, for a second attempt. It had snowed quite a bit on the mountain, which was unusual for the time of year.  It would not have been a problem – but with a very accelerated acclimatization schedule stressing the body, and a deep chill affecting most climbers on the summit night – she was one of many who made the decision to turn around and return safely to camp.  Most unfortunate to not make it to the summit, but she’ll be back!   Hard to leave it unfinished at this point!

On her third attempt, Meagan summitted Ojos del Salado (22,615 ft / 6893m) in the Atacama Desert. Though not a technical climb, there always seemed to be some challenge that interfered with her efforts to reach the summit of this mountain.  The stars aligned on 23 February 2019, and she happily stood atop the summit.  A beautiful, cool day – she felt a deep sense of completion.  The Atacama is a beautiful region, and she will no doubt return for more climbing! 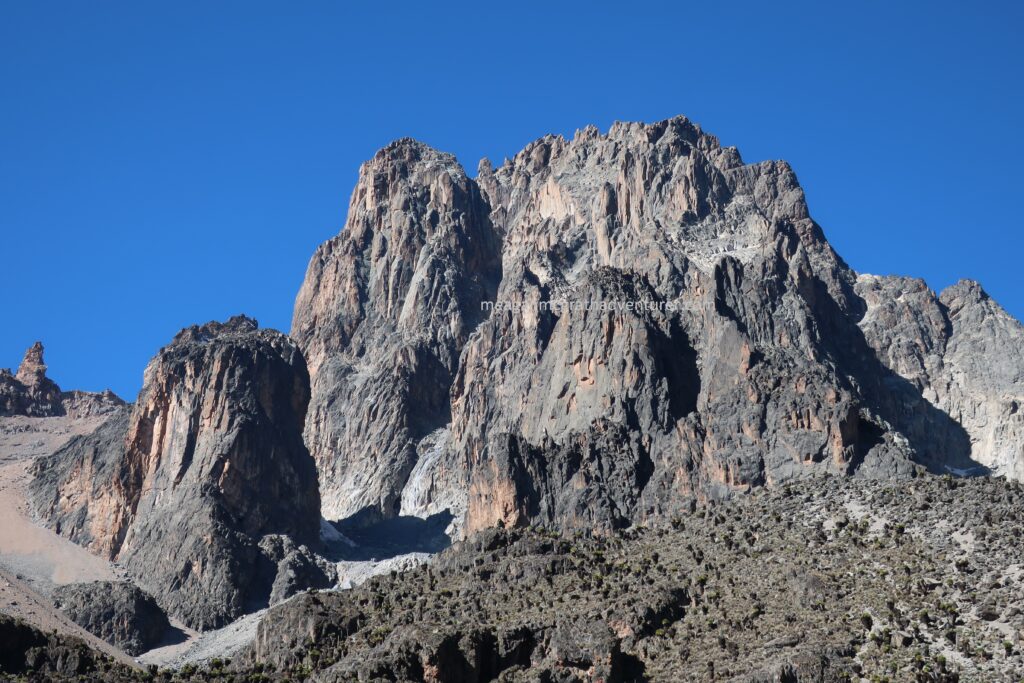 Meagan has been thinking of a particular project for a while….

It’s still far too early to state the specifics, but let’s just say that climbing Africa’s second highest peak is one of her project objectives.  This is a somewhat technical climb, involving many pitches of rock climbing at some altitude (Batian’s summit is at 17,057 ft / 5199m).  Her Kenyan climbing guide/partner was a rockstar!  It was a long climbing day;  they carefully scaled the rocky crags toward the summit, and then rappelled down the route.  All in all, a very fun-day!! 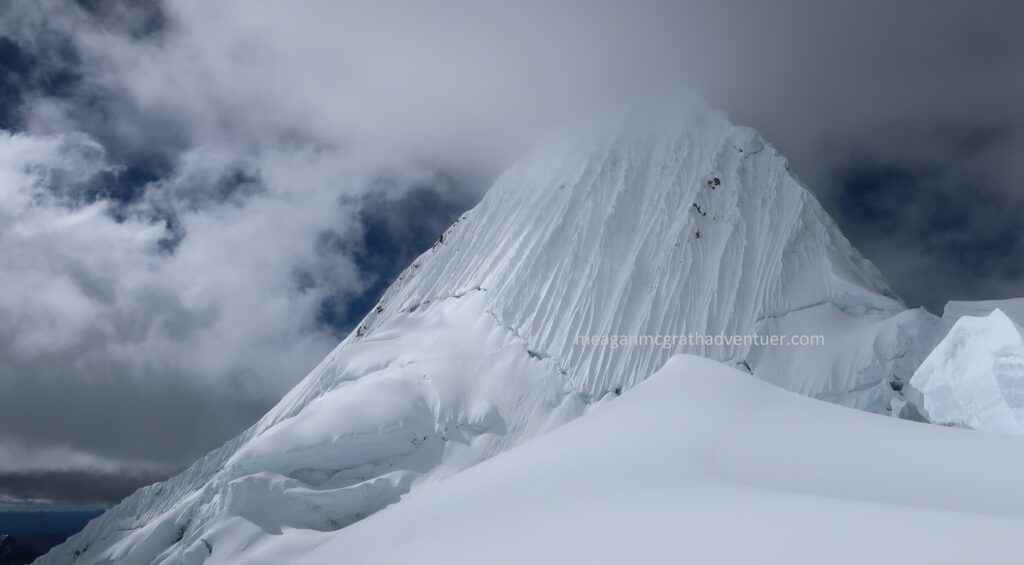 In June 2018, Meagan had to find a mountain to climb.  After a bit of thought, she remembered a photo of a mountain that seemed to hang on the walls of every other tea house in Nepal’s Khumbu Valley.  She recalled that this particular mountain was called Alpamayo – considered by many to be the most beautiful mountain in the world.  Seeing as how this mountain in South America was special enough to be featured in Nepal, it must be worth a look!  In combination with Alpamayo, Meagan also developed a plan to climb Artesonraju (Peru) and Illimani (Bolivia).  Well, as fate would have it, on the final pitch of the beautiful, technical climb and only meters from Alpamayo’s summit, Meagan was involved in a climbing incident with 3 other climbers.  The summit was not to be that day, and the climb became a difficult two-day journey to descend the mountain and reach the mountain city of Huaraz for a visit to the hospital.  All climbers have recovered from the incident. And of course, Meagan continues to climb, and looks forward to attempting these mountains, again, in the future! 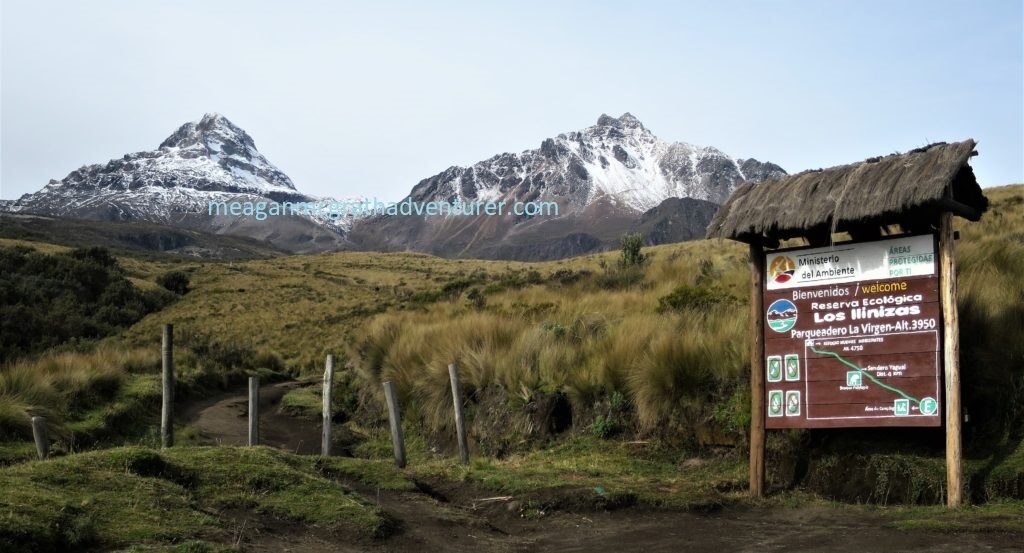 In May 2013, Meagan stood atop Illiniza Norte and looked across the way toward Illiniza Sur.  She wanted to climb the mountain as soon as she set her eyes upon it.  But, it would be an adventure for another time.  Cut to January 2018, when her plans to return to Ojos del Salado were put on hold due to her partner’s illness.

She needed to find a climbing trip and partner, fast – so she contacted a trusted climbing company, and found herself on a short adventure to Ecuador.  Her main goal was Antisana, but her preferred objective was Illiniza Sur.

With her guide (yes – it was a guided trip due to short planning timeline!) they easily made their way to the summit of Illiniza Sur (conditions can be quite poor, but they were lucky!).  After a brief rest in the hut, the thought of sitting in the hut all day just seemed “blah” – so they headed up Illiniza Norte, as well.  All done in the same morning!  Quite fun!  As for Antisana, the bergshrund was pretty intense.  Unfortunately, the selection of the route meant we were committed to it for the day (it would be too late in the morning to try another route as avalanche was a consideration).  So no Antisana summit, but a fun filled, short work out all the same 🙂 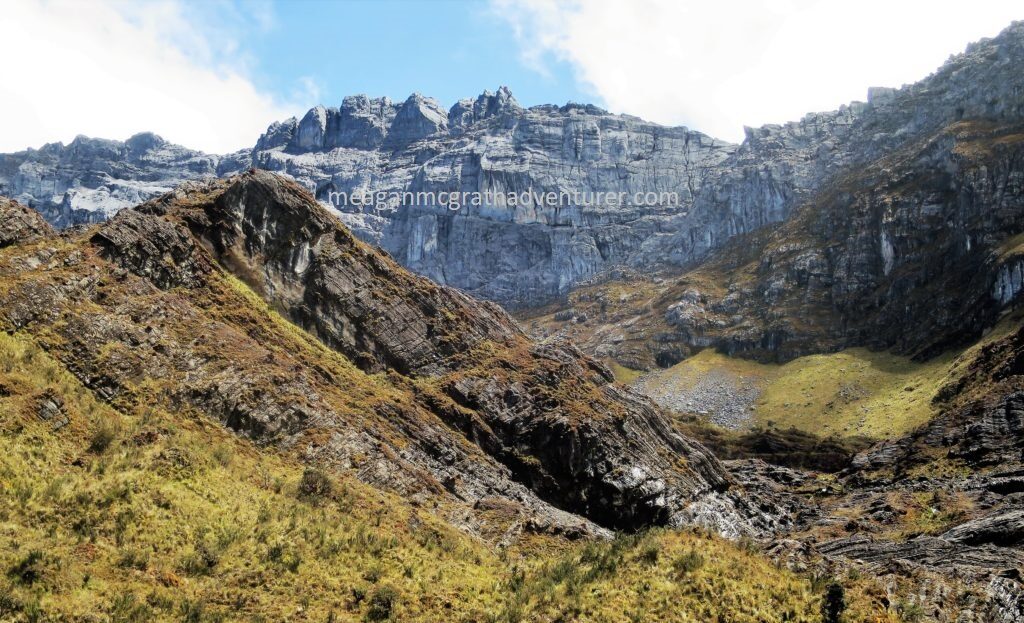 Always seeking an adventure, Meagan decided in early 2016 to embark on a jungle adventure.  But she had not climbed for a while, and she missed the thin air.  Jump to December 2016, and Meagan departed for Papua, Indonesia for a jungle/mountain expedition.  In her research of the climb, she found the names of a couple other climbers who had made the attempt.  The key was to find a “fixer” (logistician) who could sort out transport, permits, porters, etc in country.  She found a fella, and she joined him upon her arrival.

​​No summits were attained due to things way outside her control, but it was a helluva adventure!  Which really….was kind of the point  😉 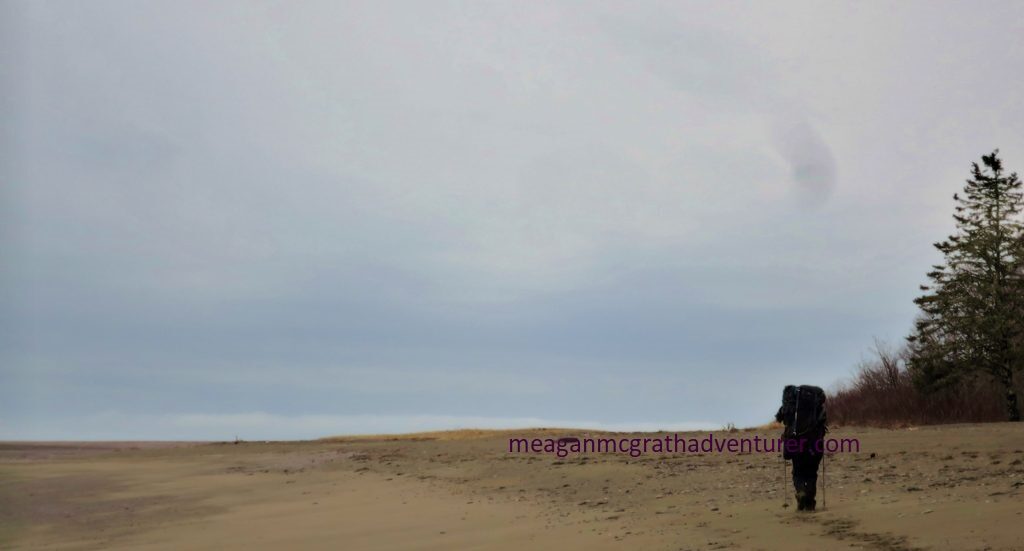 In April 2016, Meagan got an email from a film-maker friend, Dianne Whelan.  She asked Meagan to guide her along the earliest (seasonal) crossing of the Fundy Footpath as part of her film project:  500 Days in the Wild, an epic adventure as she hikes, bikes and paddles the Trans-Canada Trail.

Turns out – the Fundy Footpath, in New Brunswick, Canada, is an awesome hike!  It is fairly unknown in parts outside Eastern Canada – but I highly recommend it!  It was technically winter, but the conditions were not too bad.  With more snow, the hike would be quite an excellent challenge”! 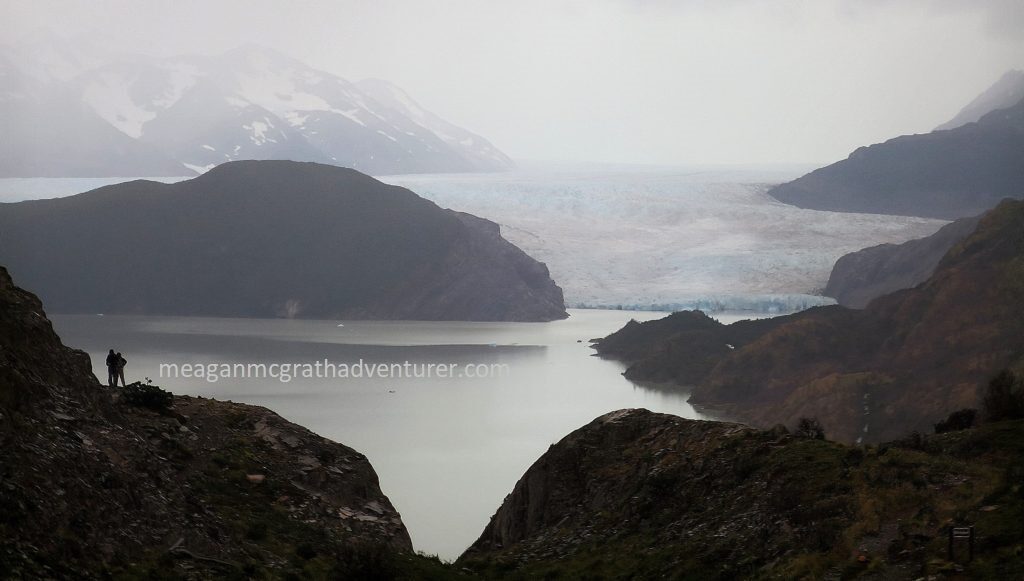 Following the very successful expedition to Vinson Massif in January 2016, which ended a few days early, Meagan took the opportunity to travel to Patagonia and hike the beautiful trails of Torres del Paine National Park.

The terrain was gorgeous, even in the persistent cloud cover and rainy weather.  Hiking beside lakes and in the trees, and viewing the blue ice glaciers, the granite spires and walking along the pampas was great fun! 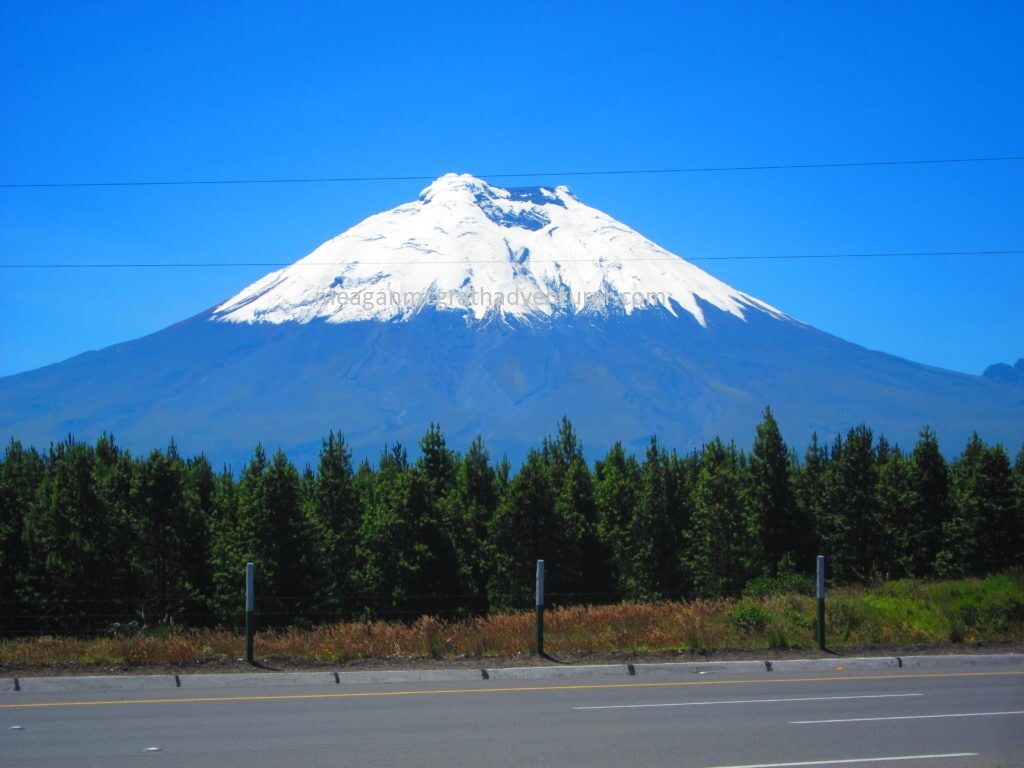 There is so much to do here – it’s worth a few visits! 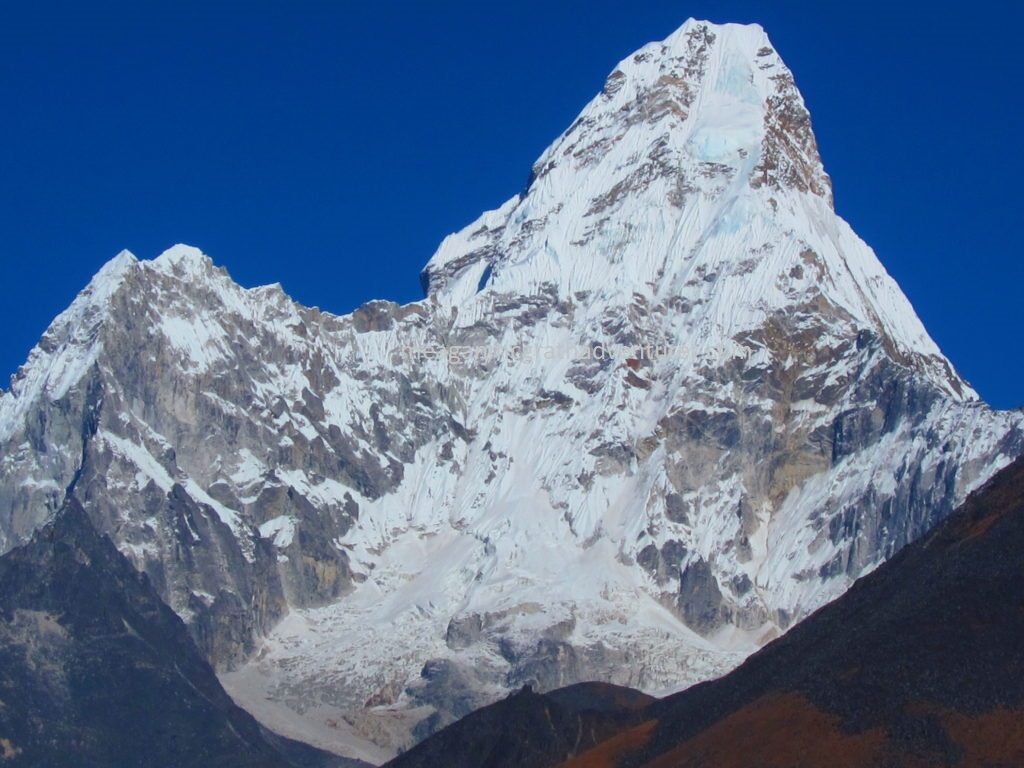 Ama Dablam (22,494 ft / 6856m) stands prominently in the Khumbu Valley, and is particularly notable on the way to Everest Base Camp.

Meagan first attempted Ama Dablam in Oct 2010; it was a long shot as it was very early in the season and she only had a few days to give it a shot, but any time in the mountains is time well spent. Her second attempt was successful in Nov 2011. A heck of a fun go – with stunning views, great exposure – a wonderful mix of rock and mountain climbing skills.

Meagan was a Guide-in-Training for this climb. 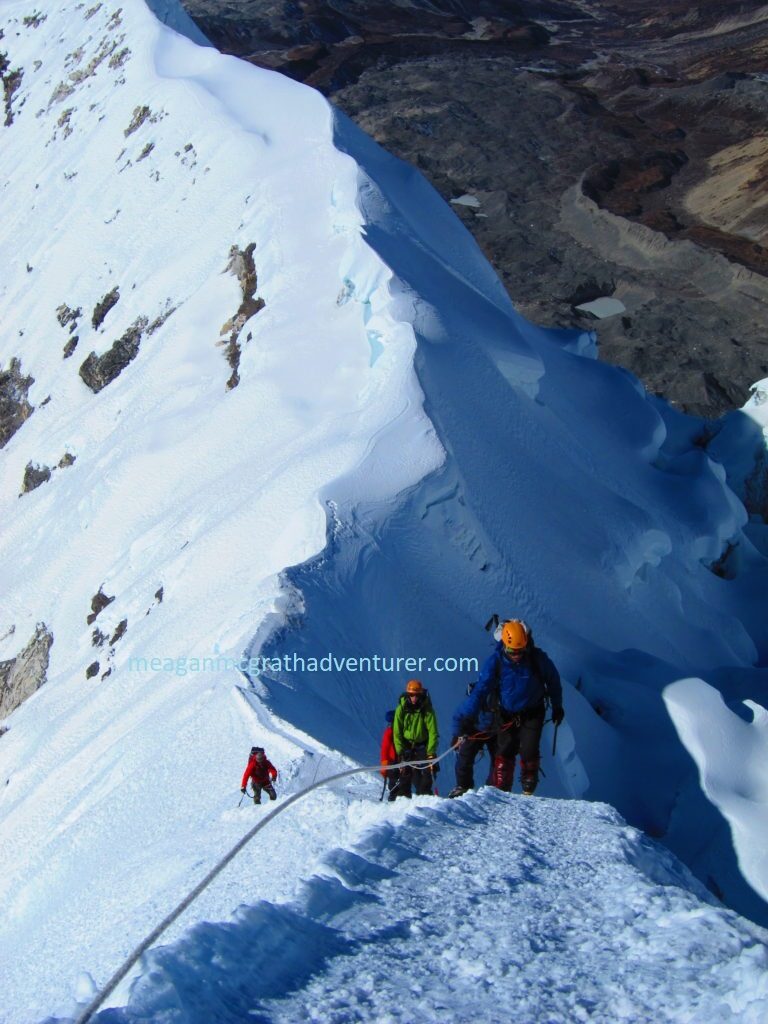 Island Peak, also known as Imja Tse (20,285 ft / 6183 m), is an excellent trekking peak that is perfect for introducing folks to climbing in the Himalayas.

Meagan was a Guide-in-Training for this climb, and it was a great experience. 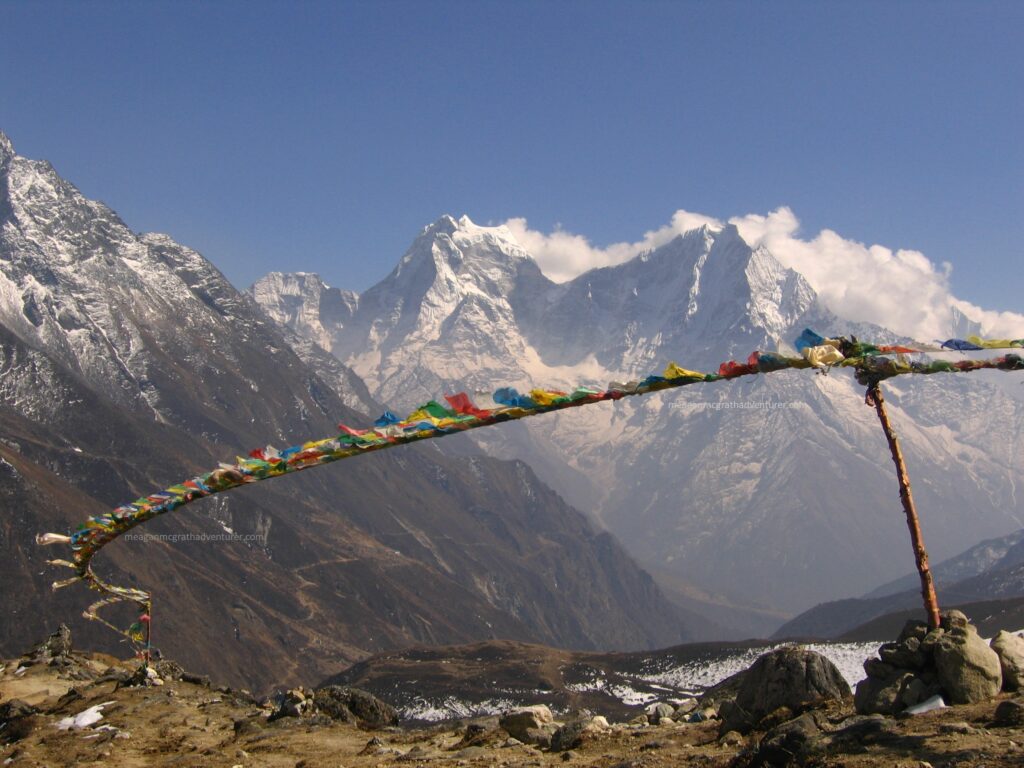 Meagan co-guided an Everest Base Camp Trek in March 2010. Trekkers hiked through the gorgeous mountainous valleys in the Khumbu region of Nepal, ventured up to Goyko Peak, ascended Kala Patar, and visited Everest Base Camp.

When “The Adventure Travel Company” asked Meagan to guide the trip – one that she is very familiar with – she jumped at the chance to share the experience with others!