Meagan seeks to explore these places because of the challenge of surviving and thriving in such heat and dryness. The adaptations of the flora and fauna have made in order to live in hot/dry climate are fascinating.  Whether you are noticing the fossils, live critters, or even ancient sea shells, the desert is a place of wonder! 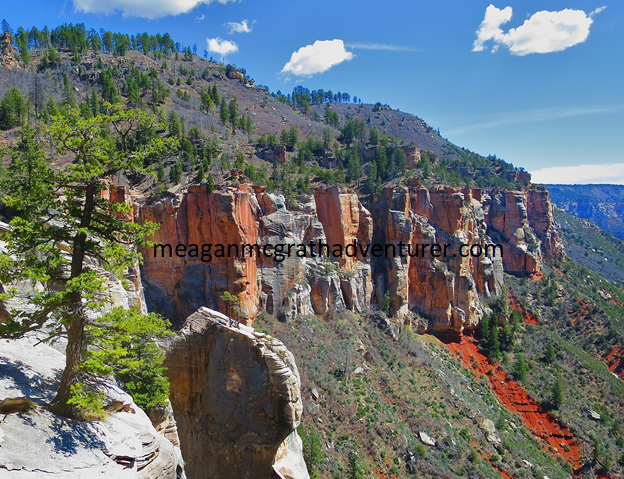 The Grand Canyon – a beautiful, breath taking landscape.  It’s awe-inspiring to view, and even more amazing to travel through.  The Rim-to-Rim-to-Rim (a run from the South Rim to the North Rim and back to the South Rim in a single day) was an interesting challenge Meagan set for herself.  She did a concept trial in April 2014, but determined it would be best to tweek some elements before going the whole distance.  Training was difficult, as she was posted to Winnipeg, Manitoba at the time (in Canada’s prairie – ie – flat lands).  Running 11.9km from the South Kaibab Rim to the valley floor (Phantom Ranch), an elevation change of (4714 ft/1437 m) – was the easy part! The next step was contending with the gradual ascent (2054 ft/626 m) from Phantom Ranch to the Pumphouse Ranger Station (13.4km) , and then hiking/jogging up (3641 ft/1110 m) to the North Kaibab Rim (8.4km).  And then, doing it all over again in the opposite direction 🙂 There’s a certain enjoyment to setting goals while pushing yourself physically and mentally to achieve the challenge – all in a single day!  “Hard is not Impossible” – someone said.  I have to agree with them!! 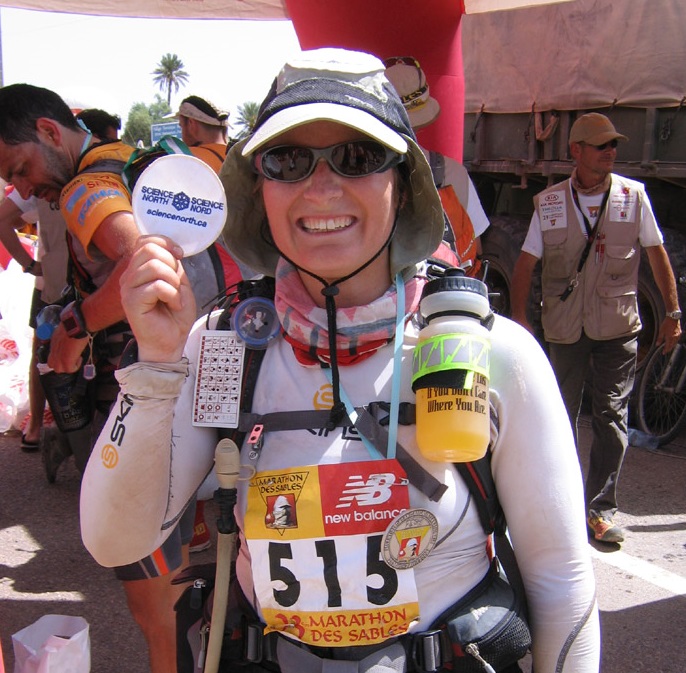 International participants, typically between ages 16 and 78, ran/trekked at a speed between 3 and 14 km an hour. All participants carried everything they needed for the duration (apart from a tent) on their backs in a backpack (food, clothes, medical kit, sleeping bag, etc). Water was rationed and handed out at each checkpoint, and during the morning/night (Bivouac areas), by the organizers.

Meagan had to prepare and manage her food resources (freeze-dried, energy bars, etc) throughout the race. The minimum calorie intake was strictly controlled by the event organizers, and was required to be a minimum of 2000 calories/day. The Sahara desert (Morocco) temperatures for this extreme event rose to mid-day temperatures up to 120°F (48°C). And she ran and walked on uneven rocky, stony ground, and sand dunes!

Meagan endured extreme heat, long distances, and monotony. Fortunately, she did not suffer from severe rubbing of the feet (blisters) or severe injury (ill prepared, improper equipment, or shoes). This extreme challenge was both physical and mental, where all of a person’s energy was required to complete the event. Because the event lasted 7 days, it required very strong determination and the will to push oneself beyond the monotony. Meagan McGrath completed this extreme event and was a great representative for both Canada and her selected sponsors.